A series of paintings with gouache, exploring the world of Japanese mythology.

During my childhood I was hooked on comics and books and loved immersing myself in other (fantasy) worlds. But more often than not those worlds were in some way connected to 'reality'. Fantasy and reality are always connected. How fantastical is reality and how absurd and wonderful is everyday life?

I started this project amidst the throws of the Covid19 pandemic, a time in which I find it extra enjoyable to read such stories and research this rich visual history. With my project I want to introduce people to all kinds of fascinating Japanese myths, but also prod and stimulate imagination, fantasy, a sense of wonder and mystery, and feelings of playfulness.

Red thread of fate refers to a Japanese myth that appears as a legend in the whole of East Asia and
has its origins in China. The red thread of fate connects two people who are destined to meet. The thread is invisible and indestructible: a special bond which can not be broken, regardless of place, time and circumstances. This connection will be given concrete form through an encounter. 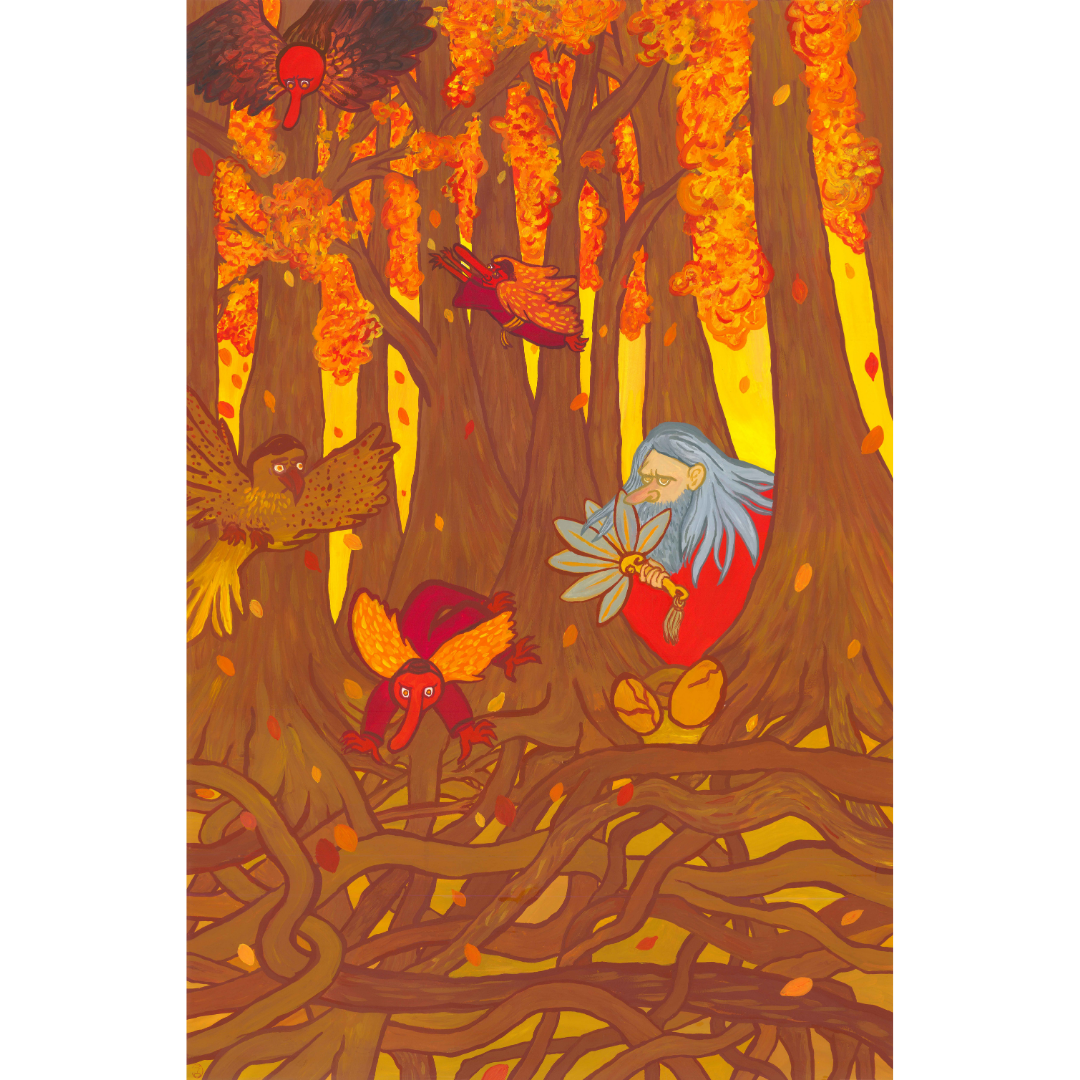 Tengu on Mount Kurama, 2020. 55 x 85 cm.
From the series Japanese mythology.
Gouache on Fabriano 200 g watercolour paper.
€ 920 including 70x100 BARTH Frame - CLARITY AR70 Glass
This painting can be viewed on appointment at my home studio in Amsterdam. Feel free to contact me to make an appointment or if you have any questions.
Elaborate art blog about this painting
Link to this painting in my webshop
Fall at Mount Kurama, close to Kyoto. Two tengu eggs are hatching near Sōjōbō (a very powerful tengu residing at Mount Kurama), symbolizing the ongoing cycle of life even in times of crisis. Sōjōbō is holding his fan with which he can create terrible storms.
Soon seven tengu will be gathered amidst the falling autumn leaves on Mount Kurama. Seven is a lucky number in Japan.
I hope you enjoy the painting, for my hope is for it to bring a bit of color, imaginary power, playfulness and positivity to those that view it.

Tengu: This painting refers to tales and legends involving tengu and visual representations of tengu found in Japanese woodblock prints, combined with my own imagination. Tengu are one of the many legendary creatures found in Japanese culture, and are considered both yōkai (supernatural beings) or Shinto kami (gods). They have been depicted as birds, bird-like creatures and nowadays their most defining characteristic is a long red nose. For centuries there was a belief that tengu were disruptive creatures up to no good,  but their image has changed into one of protective, yet still somewhat dangerous, spirits dwelling in mountains and forests.